Kids are More Complicated than . . .

I keep seeing this statement on Twitter - "We have to Maslow before they can Bloom."  While I understand the hearts of people who are posting this, I find it bothersome for a number of reasons. 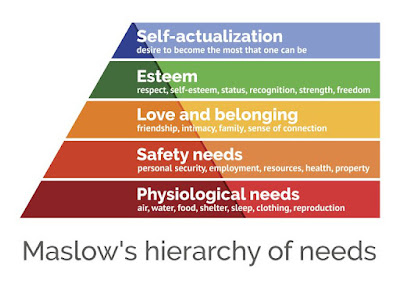 For those who weren't education majors, let me explain what these two men's names mean.  Abraham Maslow was a psychological researcher, best known for his proposal of the human hierarchy of needs.  Because book publishers just can't help themselves, it was published as a pyramid (Maslow never portrayed it that way), implying that you had to work your way up the scale.  This has been taught to every education major since the '70s, without regard or even thought to whether it lines up with your worldview.  It's just accepted as a given, like gravity. 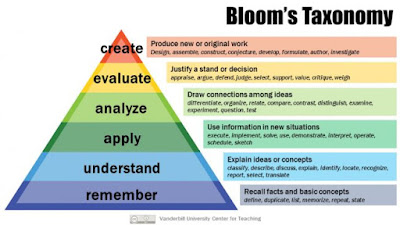 The second name in the platitude is Bloom.  Benjamin Bloom was also a psychologist, and he's also known for a pyramid.  His was changed for the digital age, but some version of it has also been taught to education majors for several decades.  Many teachers write exams based on this model, using the assumption that the ideal test will have as much from the top levels of the pyramid as possible.


While there is much good to be gleaned from the work of both men, you might want to ask yourself first if their conclusions align with your worldview before adopting them.  If you are a Christian, you might take issue with the idea of self-actualization.  Maslow was a secular humanist, which is at odds with your world view.  Near the end of his life, even he wrote (never published) that "self-actualization is not enough" and discussed why it was important to seek the good of others.  He also asked, "Why do we leave mystery and awe to the churches?" when he realized that his work never took into account anything outside of the individual.  A more in-depth look at his work will also show that he cared about a balance of the needs.  He never implied that the ones on the bottom had to be met before the ones above them could be, which is what most of us were taught.  His late work included words like transcendence and reverence, but what we accept as his teachings from the pyramid ignores those things.  Bloom is less problematic because it is merely about thought processes and not about your life as a whole (You wouldn't be recommended for therapy for not reaching high levels of Bloom's taxonomy like you might for not reaching high levels on the Maslow pyramid).  It's handy for lesson planning, but I have to ask again about whether it aligns with your philosophy.  Are these the thought process you look for in your students, or do you want something above the "create" level (again, the words awe and reverence come to mind)?  Do you want them to then be able to connect these thoughts to their creator?  If so, there need to be a few more steps on the pyramid.

What is most upsetting to me that their years of intensive research have been boiled down to two oversimplified pyramids and then ranked in comparison to each other.  Human beings are complex.  They are far more interesting than can be summed up by any theory.  They are individuals who resist generalization, whether that is "learning styles" or personality types or enneagram scores.  God has created each child to respond to the world individually,  given each of them a different relationship with each of their teachers, and made them care differently about each of their needs.  Boiling down your educational philosophy to a tweetable phrase ("They don't care how much you know until they know how much you care." or "They don't give you what you expect, only what you inspect." or "Our learning is blended, personalized, student-centered, individualized, competency-based, data-driven (pick your favorite buzzword)."  I left public education because I didn't like the expectation to fit in a box, no matter how good the teacher in that box was.  Your students don't fit in a box either.

Just because we can tweet a catchy phrase doesn't mean we should.

I returned to school this week.  I was a little nervous the day before in a way I'm not usually.  I think, because last year was suppose...

PhysicsGeek
I've been a teacher since 1998. There are many things I still need to learn in my profession. If I share here, perhaps others will too. Then we can all learn from each other as we teach our students.